Deformity is a general term used to describe the curvature and deformations which are occurred in the bones. Knee deformities are commonly known as “O-shaped legs” or “X-shaped legs” and are the most common reason for referral to the pediatric orthopedic clinic. In addition, deformities involving the hip and foot region are also encountered in children.

Said deformities should be evaluated in detail and a differential diagnosis should be made whether it is seen during a normal growth or a situation that needs an urgent intervention. Children who exhibit the deformity usually along with walking and expected to recover in the coming years do not need to use a special device, and only the follow-up is sufficient. In the actual deformities other than these, the load distribution in the knee, hip and ankle may be disrupted, as a result of which some problems that are needed to be improved may be occur.

Causes of the Deformities

The majority of the deformities are congenital. The acquired ones are seen along with the diseases that disrupt the bone quality. Among these, the most common condition is rachitism, a disorder seen as a result of vitamin D deficiency. However, it is pleasing that when vitamin D is compensated in this group, the problem is solved. There will be no need for surgery. There is no chance of improvement in the congenital diseases. Leg curvature increases during the growth period of the child. Therefore, it is necessary to take precautions against the ever-increasing curvatures.

Leg Development in Children and the Relationship with Deformity

There are stages for a normal leg development in children. When the child first starts walking, the leg looks like an “O” shape. As the gait accelerates, this appearance begins to improve, a complete improvement occurs after three years of age, and a shape of an adult leg is formed after five years of age. Normal development continues in this way. The families usually apply to the clinic when their children first start to walk, in the period during which the curvature of the leg is normal. If there is no problem in the joint of the child, the child's general health is good, his/her nutrition is proper, and there is no problem related to the development that draws the pediatrician's attention, then it is necessary to inform the family and unburden them; because the curvature is known to be almost completely corrected, and there should be waited.

Follow-up of the Deformity

The factors to be paid attention by the families for the children during walking is to measure the gap between the knees with the fingers when the child joins his/her legs together and stands at attention. They can monitor whether this gap decreases, for example, to three fingers, then to two fingers after six months, and gradually improved. The families who come to the clinic are told how to follow up. They are asked to do this measurement every three to six months.

For diagnosis, firstly a simple X-ray is taken and the parameters related to bone development and metabolism such as calcium and phosphorus levels in blood are examined. Blood tests are performed for a suspected condition. The patients are referred to the pediatric endocrinology and sometimes to the genetic department, depending on the extent of the problem. In collaboration with these departments, the criteria such as whether the child's illness is a congenital condition or the illness is related to the hormone deficiency are evaluated, and the treatment is determined in the light of this information.

Determination of the Type of the Treatment

The most important criterion in the treatment is age. As the child grows, if the problem will increase, then treatment is first applied to stop the progression. For this purpose, there are treatments for correcting the leg curvatures using various orthoses, but their proven effect has not yet been demonstrated.

The most common treatment during childhood is very small plates placed in the bone growing region. These plates allow the bone to correct as desired. This procedure is easier and less risky than the more difficult operations such as bone cracking and bone fracture. If the child is brought to the clinic at a late stage and the correction will be insufficient according to the calculations, then the bone is cracked and then corrected. X-ray films are taken, and a rigorous examination is done. How many degrees and from which part of the bone will be corrected, which results will be obtained, and how the child's leg will look like will be calculated in a computer environment. The treatment program is arranged accordingly.

Sometimes when these devices are applied, some improvement in the legs occurs. However, it is not yet a scientifically proven application; nevertheless, if the family does not want a surgery, then it may be considered an alternative.

Factors to take into consideration after surgery

A regular follow-up is very important after the surgery. The patient is followed up with X-rays and clinical examination. The most important factor in the early postoperative period is wound care, which is performed by the physician performing the surgery. Then, the muscles of the child are strengthened by physiotherapy.

In addition, there is a condition called rotational problem. Rotations from hip bone in girls and from tibia in boys are more common. Briefly, the tip of the foot should point slightly outward while the children are walking. If the toes and especially the kneecaps are facing inwards, the parents bring the child to the clinic as they think that their children have an in-toe gait. 95 percent of girls recover spontaneously. The families should know that 95 percent of children recover spontaneously. The curvature increases in girls until the age of five and improves between the ages of five and ten years. Treatment is needed in 5 percent of them, but does not substantially require surgery. An improvement is achieved by shoes, insoles and a number of devices. In summary, it is very important not to be in hurry in rotational problems, to follow the child closely and to apply the right treatment when necessary.

After the age of ten, out-toeing of up to twenty degrees and in-toeing of up to five degrees are considered normal. In the case that the in-toeing is more than these values, it may cause problems as it will lead knee pain. Therefore, things to be done by talking with the family are planned. 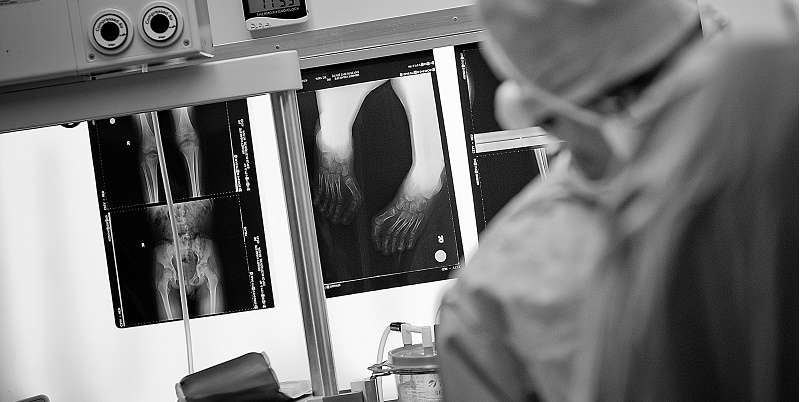